This year, 2017, we celebrate the 500th anniversary of the Protestant Reformation. While the event on October 31, 1517 was by no means the beginning of this movement (as many forerunners had emerged before then), Martin Luther is considered one of the greatest reformer, and his written protest against the sale of indulgences (known to us as The Ninety-Five Theses) is recognized as the start of the Reformation. As I looked deeper into the life of Luther and era he lived, a few other things interested me, and one of them is his music. We know that in addition to a church leader and a theologian, Luther was also a hymn writer. He composed both lyrics and tunes for his congregation. His famous piece “A Mighty Fortress Is Our God” has been sung by Protestant churches till now. But this was all I knew about his music. As a church musician, more questions came to my mind: how did he write hymns? How did his life experiences shape his music? How did people worship with his music?

In this article, I will first go through Luther’s life briefly, and explain why he had to re-organize the church worship. Then I will share 6 hymns of Luther (out of 38 or more written by him) with YouTube videos. Finally, I will address a few things that we as church musicians can learn from him.

The need for a worship reformation

Luther was born in Eisleben in 1483. He went to University of Erfurt and received his master’s degree in 1505. Afterward, he attended a law school briefly, but then dropped out and entered a monastery as a monk in the same year. In 1508, he was appointed to teach theology in Wittenberg, where he spent almost the rest of his life ministering. In the following years, he ministered in Wittenberg while seeing the corruption of the Roman Catholicism. Reading the Books of Hebrews, Galatians and Romans in the bible led him to be convinced that human are saved by grace alone, and no human effort can contribute to salvation. On October 31, 2517, he sent a letter to his bishop to protest against the sale of indulgence. 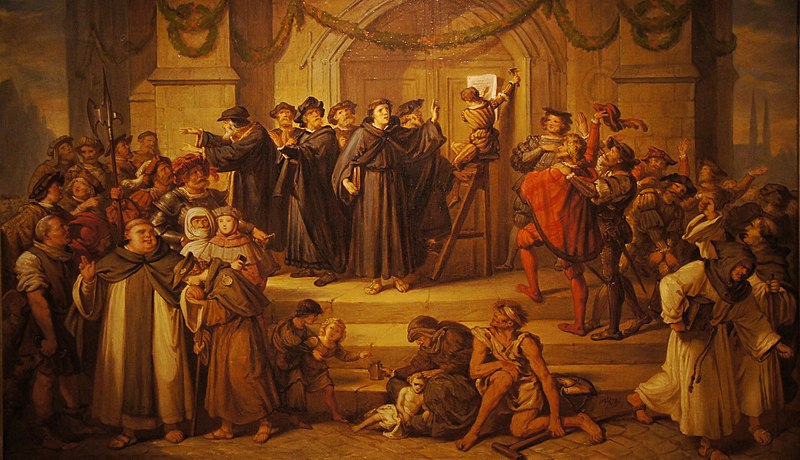 While having no intention to split from the the Roman Catholic initially, this act and following movements quickly developed into a schism. After his excommunication, his church was no longer subject to the Pope, as well as all the Catholic doctrines and rules. However, built on top of the reformed theology and doctrines, how should the new church be organized? How should they worship? What should be taught? As the church leader of Wittenberg, these are things he inevitably had to deal with.

When establishing the new order of worship, Luther’s approach clearly reflected his teaching on “universal priesthood”: all Christians have direct access to God. Before then, in Catholicism, the Scripture was read in Latin, and the congregation rarely sang hymns. Laymen had very little involvement in a worship service. Luther’s worship introduced several innovations to the church: (1) congregational singing, where everyone opened their mouth and sing the same hymn together; (2) service in local language, instead of Latin, which was understandable to all attendees throughout the service; and (3) reciting the creed in unison, which put fundamental biblical truth in the center of the service.

And his philosophy of congregational worship was also reflected in the hymns he composed. He chose to write worship songs in German (the everyday language of his congregation), with a musical style connecting high art and folk songs (to be accessible by all kinds of people), made deliberately for congregational singing (so everyone can get involved), and conveying essential truth of the bible.

To better understand how Luther’s music, I selected 6 more known hymns written by Luther. Some are in contemporary, rearranged versions.

This is a three-stanza hymn based on the Apostle’s Creed. Luther nicely divided the Creed into 3 sections, each for one person in the Holy Trinity: “We all believe in one true God”, “We all believe in Jesus Christ”, and “We all confess the Holy Ghost”. The lyrics are derived from his explanation to the Creed in his Small Catechism, which is a bit longer than the original Apostle’s Creed.

The tune may sound a bit dull to us today, but it was amiable to Germans at Luther’s time. By adapting and composing tunes that were familiar to his congregation, he made the worship service accessible to everyone.

Another way Luther wrote songs is to take Psalms from the bible and add contemporary tunes (of his time) to them. His most famous work “A Mighty Fortress Is Our God”, based on Psalm 46, is a good example. Another hymn of supplication, based on Psalm 130, expresses a deep and fervent desire for God’s forgiveness and redemption. In this version, the male voice with a guitar was a simple but truthful representation of the message.

This is a hymn written for the Advent, the period of time before Christmas when believers prepare their hearts for the coming of Christ. A short melody is repeated for eight verses. It is brief, simple, easy to pick up, but passionately conveys the longing for the coming of Christ the King. It was later adapted by Protestant composers such as Bach in his works.

I was amazed by this contemporary version. It goes from very simply, non-metric singing, to a much richer harmony, gradually incorporates some Jazz components, and ends with Gospel singing.

Luther’s hymns cover almost all essential doctrines of the Christian faith, including the baptism. Unlike the baptism songs we sing today (which focus on the joy and praise of being redeemed), Luther’s baptism song sets a scene of encountering Jesus on the bank of Jordan, and extends a warmly invitation for people to be baptized.

Although we often intuitively connect Luther’s most famous song with the most known event in his life - the posting of The Ninety-Five Theses, which took place in 1517, this song was actually composed much later in the year of 1529. This song is again a great example of him modernizing a Psalm for the congregation to sing praises. It has been popular across denominations till now.

Among many versions available online, I chose this instrumental one played in a Jazz and Blues style. Although Luther’s music is very different from the mainstream church music today, it is still fairly approachable, as we can see in those lovely rearranged versions.

Things we can learn from Luther’s music

Luther’s faithfulness and thoughtfulness can be seen in his music, as well as the worship order he established. He chose a practice that best reflects the Protestant doctrines, used music as a means of teaching the truth, and made worship a collaborative action. In this brief exploration of Luther’s music, I see a few things we as church musicians can learn from him:

Learning church history is a good way to understand the historic context of the Christian church, and learn lessons from our pioneers’s examples (both good ones and bad ones). Luther was not perfect. His later anti-Semitic teaching is still on dispute today. He was a sinner just like all of us, but via his teaching, his music and the worship order he established, we come to know the perfect God who makes His grace open for everyone, without favoritism.